Dear customers
Your babacheap.com site will remain open and we will be able to deliver to your home safely. If you have any difficulties returning your order, please contact us at contact@babacheap.com.
We will find a solution together. The Covid-19 crisis has profoundly changed our lifestyles and, no doubt, our perception of the world around us. Rest assured of our solidarity.
Take care of yourself and your loved ones. #stayathome
Menu list

Home Blog > News > The velvet, an ally infallible in the winter

The velvet, an ally infallible in the winter

Left side, sometimes even ringardisé a few years earlier, the velvet is imposed today as the must have of the wardrobe of the winter. As a phoenix, which can be relived from its ashes, the velvet is taking the catwalks of the greatest fashion designers and prompt in the rays of the ready-to-wear. How is this tissue that is believed to be fallen into disuse allured the fashion enthusiasts of the winter of 2019-2020 ? The drafting of BabaCheap responds to this question in this article.

The velvet is much more than a cloth : a finish

Originally, the velvet refers to a tissue ras on one side and covered with fine hairs, gentle and prepared on the other side , hence its Latin name "vilosus" which means hairy. But the velvet is also a finish resulting from a treatment machine equipped with two chain systems, thanks to which the fabric gains a look similar to that of a stuffed toy.
For the small history, the velvet was invented in Kashmir (India and Pakistan) at the time that it then bore the name of the down of swans. Later, he landed in Persia, and then popularized in Europe.

The characteristics of the velvet 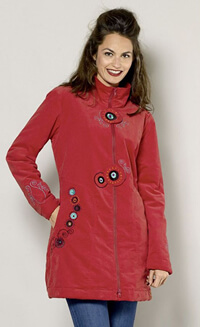 Both in the world of upholstery fabrics in the world dress, the velvet continues to be a winner for its soft endless touch. This particular trait is due to its manufacturing process which consists in maintaining the fibers flush very tight. It is also thanks to this that the velvet is known for its virtues heaters, and it is easy to understand why there is a strong demand in the winter.

From what materials is built-on the velvet ?

What you need to understand with the velvet is that it is constructed with natural fabrics, treated to obtain the finish velvety and sugary.

Note that there are also the velvet-gloss or velvet platinum that we originally used for the outfits inside the social classes very easy. With time, this velvet platinum has accompanied the tuxedos for evening and cocktail, very popular in the 1960s.

The velvet in the fashionable ethnic : why wear them ?

It was well finished to shun the velvet since it was stopped ringardiser ! This winter, some of the great creators do not swear even on this matter which the mode ethnicity is also captured. Why wear ethnic velvet ?

The velvet protects us from the cold

Let's talk about practice and function first ! If the velvet is more popular in winter than any other season, it is because he recognizes her ability to fight against the cold. In jacket as a dress, coat, pants, or sweater, velvet remains a strong ally against the icy wind.

The velvet brings to the style

A look ethnic dressed, it is feasible in a blink of an eye with a touch of velvet, who has the gift of bringing style and sophistication to any look. Because currently it is very trendy to mix textures, this will be a good point for you to mix the key sophisticated glamour of the velvet with the rendering of the other materials. Also, the touch of velvet will make a nice shade if you're a fan of the total look.

The velvet is a timeless

Even if it is predestined in the winter, the velvet will be alive and well this summer. Side investment, there is nothing like getting a good deal ! And yes, it is hype and will certainly remain for a few seasons yet. When the velvet finally comes out of oblivion, it will not yield its place easily !

How to wear the velvet ?

If you initiate only to this material that gives off a chic, remarkable, avoid the faults of style and play on the dosing. A top or a bottom with a portion of velvet will be sufficient to start and BabaCheap account of many of the articles are moving in this direction. To offset and avoid the fashion faux pas, you can opt for a material rather basic, like denim, for an effective combination.
When you are a expert and that it is not afraid of extravagance, it turns without a problem to a total look velvet : pants and top, or a matching set ; you make your choice.