Home Blog > News > Statue of Buddha : when the asian is invited into the interior design ethnic

Statue of Buddha : when the asian is invited into the interior design ethnic

Statue of Buddha, the new entrant in the world of interior design ethnic ! This style provides a change of scenery to the dynamism and furious is today a resurgence of originality thanks to the success of the statues of Buddha, symbol of wisdom and human perfection. Culture, spirituality, belief, so many concepts are put forward thanks to this new trend. In this article, we offer you a tour of horizon in this new element of decor that will bring an " asian touch " home with you !

Buddha Statue : what representation and what meanings ? 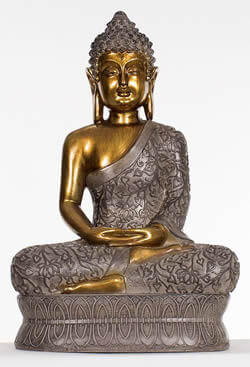 Leave to invite the Buddha statue at home, as well understand the meaning. And to do this, focus on a brief history !

Go back to the Fifth century bc J.-C. to remind us of this indian prince called Siddhārta Gautama who was at the origin of the doctrine buddhist, based on the wisdom, the communion with humanity and the universe. According to oral traditions, the first representations in the statue of the Buddha began to appear approximately 500 years after his death.

The Buddha statues come in different designs : there are those who relate to only the character's head is world famous for thousands of years, and there are others which revisit in meditation posture. Anyway, we can see the statues of Buddha by the expression of serenity that emerge on the face of this being who has reached the human ideal, the large headdress on her head and, sometimes, a flame which symbolizes his ultimate wisdom.

Buddha Statue : the locations according to Feng Shui

In the world of interior decoration ethnic, it is all about originality, it allows keys to cultural and spiritual for a new. There was nothing surprising in this, that the statues of the Buddha as pieces of home decor are a place of choice in this trend ethnic.

The ethnic style and Feng Shui intersect in the search for a harmony with nature, the need for a change of scenery, the urge to install good vibrations in a home. Much more than a style of interior design, Feng Shui is an ancient art which has given birth in China and who wants to handle the " Chi " (energy) in a home.

By the orientation of the openings and the placement of objects, Feng Shui aims to raise and spread the positive energies within a home, and sweep the negative waves toward the exit. In this art, the statue of Buddha reigns supreme. Only one rule to follow : never put the statue on the ground, whether it is a statue head of Buddha or statue of Buddha sat in meditation.

Statue of Buddha : where to put them ?

Thanks to BabaCheap, Buddha statues come in different sizes, but with weights relatively light to suit any medium.

The adoption of a Buddha statue in the interior decoration ethnic does it have a religious significance ?

Of course, Buddha is the buddhist doctrine, but store a statue of the Buddha in you does not mean to convert to this religion. Buddha is above all a human being, a prince, who, by the way of meditation, has managed to achieve a human ideal. It is associated with human values such as generosity, kindness, wisdom, intelligence, compassion, living in harmony with man, nature and the universe... In other words, the Buddha statue in the interior decoration ethnic invites you more to put in before your humanity.