Dear customers
Your babacheap.com site will remain open and we will be able to deliver to your home safely. If you have any difficulties returning your order, please contact us at contact@babacheap.com.
We will find a solution together. The Covid-19 crisis has profoundly changed our lifestyles and, no doubt, our perception of the world around us. Rest assured of our solidarity.
Take care of yourself and your loved ones. #stayathome
Menu list

Land of a thousand colors, to the authentic culture, with friendly people, India is also the second cradle of the textile world. Much more than a commercial activity contributing substantially to the economy of the country, the indian fabric has a value cultural, a devotion to family in which the techniques are passed from one generation to another. Longhi, Sari, Churidar, these traditional outfits of indian reflect a know-how that animates a people with a creativity to any event.

The indian fabric : between passion, technique and tradition

The indian fabric, it is a history that dates back to several millennia ago, but if this industry is even more flourishing than ever, it is because this passion continues with the new generations.

A social significance and religious

If the Indians attach great importance to the manufacture of fabric, it is because it has social and religious values.

Even if the indian fabric is the expression of a creative family that is constantly renewing itself, we note more and more of the eastern influences that enrich this industry.

The printing techniques of indian fabrics 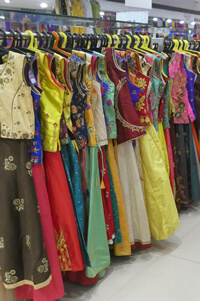 The markets are very animated to the luxury shops, the sale of indian fabric is more flourishing than ever. But what are the different indian fabrics according to the techniques used to make them ?

End of the Indian trading posts, the indian is recognized by its floral delicate that seem straight out of a spring garden. The success of this tissue is such that even the inhabitants of Marseilles, started to produce under the name of Indian Marseille.

Behind a fabric batik in indian is a long and tedious process that reflects the perfectionism of the artisans. The first step of batik is to draw on the fabric the designs. Then, it is necessary to protect the areas not to be colored with hot wax. At the time of the application of the colors, or we immerse the fabric in a bath of paint, either applied directly to the painting on the grounds. For the final step of this indian fabric, the wax will be removed by either boiling water bath or with the help of an iron.

Ubiquitous in fashion, ethnic, in particular in the collection of blouses, the tie-dye indian is a technique of the city of Rajasthan. Basically, it is a question of obtaining a gradient of color. To do this, simply tie the fabric before immersing it in one or more baths of a paint. In doing so, the level of absorption of the color is different on the interior and exterior of the fabric knotted.

The Block printing or Dabu

Printing Technique made exclusively by hand, the dabu is to sculpt a pattern on the wood before you apply it on a cloth of silk or cotton.

It is without a doubt one of the most ancient in the design of indian fabric. Like a puzzle, each yarn of fabric is first dyed according to the final pattern to be reproduced and they will then be woven, assembled and juxtaposed to obtain the printed searched. An artisan may spend several months before you can finish a pattern.

The Chanderi is an indian fabric traditional often associated with luxury for its bump map and rendering soft. The technique consists of combining silk threads with cotton yarn for a textured finish, shiny and soft to the touch.

Before becoming the traditional dress of the women of the Antilles and French Guiana after the migration of india, Chennai has seen the light of day in Chennai. It is a textile woven from fibres that have been dyed with natural dyes to obtain stripes or plaid.

It is an indian fabric pretty basic, designed most of the time with cotton. Versatile, it is suitable for all seasons. But the peculiarity of the Khadi is rather sentimental. During and after the struggle for independence of the country, Gandhi promoted Khadi in the framework of a measure of protectionism designed to promote the rural economy, and to combat imports of textiles foreign.

The KalamKari is an art form born in the south of India. Like a painter who draws on a table, the artisan draws the outline of the pattern on a cotton fabric soaked in resin and cow milk. It then applies the vegetable dyes and proceeded to wash after each color. It is also a technique purely manual manufacturing of indian fabric.